Well thank goodness it is all over. England lost. No surprises there. No more stupid flag-waving and chanting (at least for a while). Hopefully the disgraceful behaviour of its fans will now subside into a more mundane and dreary level of chavdom and petty crime.

The fact that England (or “Engerland” as it is called by its grunting fans) got chucked out of the World Cup again is not the issue here. To get a feeling for the depths to which our nation has really sunk, take a look at this oafish, useless, spiteful, moronic chav. His mum must be so proud of him… 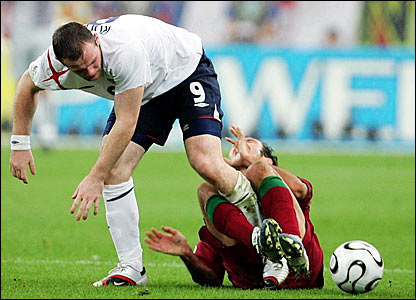 Yes folks, this is “Engerland’s” star player Wayne Rooney, stamping on another man’s testicles as he and the bunch of useless, overpaid left-footers he plays with botch yet another match.

What kind of a human being can stamp on another man’s testicles? And what sort of message does this send out to “Engerland’s” beer-swilling, brawling supporters. Is it any wonder English football fans behave the way they do when this is the example the players set?

Far from being some sort of national hero, Rooney should be charged for assault and if convicted, jailed for life. This is a criminal offence, and Rooney is a violent, useless chav who should be dropped from the team immediately.

Elsewhere, 1500 “Engerland” fans poured more shame on this once-proud nation as they rioted in the otherwise quiet island of Jersey. Apparently they wanted to smash up some Portuguese shops. Why? Because Portugal won a football match!

Strange to think that in the middle of the last century countless people gave up their lives to defeat Naziism. Today, vile racist thugs drape themselves in our flag and have a free hand to do pretty much whatever they like.

The English team and its Neanderthal supporters are a national disgrace. Perhaps before we embarrass ourselves again at the next “World Cup”, the overpaid plonker calling himself “England Manager” will have the good grace to resign his team from the competition before it plays a single match. That way we can avoid any further football-based national disgrace, on or off the field.

Perhaps the greatest irony of all is that racist, flag-waving scumbags here in old Blighty are forever complaining about immigrants. But take one look at our football team and the morons that support it. Look at our appallingly incompetent and corrupt Government. Look at the state of our streets, our public services and our infrastructure. Bear in mind we are one of the most highly taxed nations on earth. Why any self-respecting foreign person should want to live here is completely beyond me.