When I first heard about iPads, I thought it was something that geek girls might use during their iPeriods. But it seems I was mistaken.

Actually, I think the tablet form factor is an interesting one and may have great appeal in areas such as education. That’s why Nicolas Negroponte and his team have adopted it for the next generation X0-3 OLPC. However I have serious misgivings with regard to both the price and even more so with regard to Apple’s heavy-handed deployment of DRM (digital restrictions management) in these devices. In a nutshell, Apple can:- 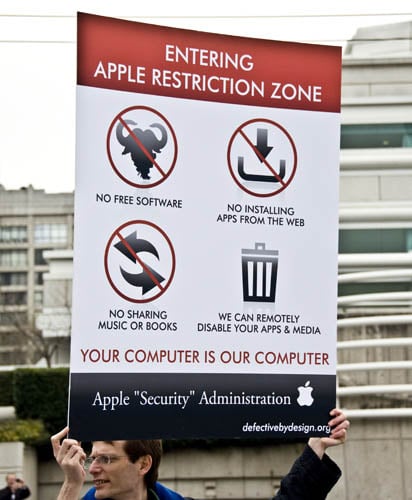 Nevertheless, a reasonable degree of commercial success for the iPad will no doubt inspire Chinese and Taiwanese companies to produce perfectly adequate generic clones. These will be significantly cheaper than the iPad, whilst not being infected with Apple DRM. Then it would not take the open source community long to write and compile decent apps for the clones. I understand that the XO-3 will be 100% OSS (open source software). So I suspect that many existing OSS apps will be ported to the generic pads very rapidly.

Therefore I’m perfectly happy to let the Apple fanbois have their fun. If they are prepared to pay through-the-nose whilst Steve Big Jobs & his minions @ Apple Computer Inc. spy on their data and dictate what apps they can and cannot use, then more fool them! Meantime, smart people will wait for one of the new generation generic pads that will undoubtedly follow – running some form of GNU/Linux and c/w 100% open source software of course.

Translated into practical terms my little goslings, that means 1/3 the cost of an iPad, 100% freedom regarding what software you install and infinite superiority in terms of privacy and security.

This was the title of a blog post over at ZDNet. So should you dump Internet Exploder. Now let me see…

Yes! Yes! Yes! Along with all Microsoft’s other products!

Let’s stand back from this for a minute folks. Microsoft is a big, greedy, highly profitable US corporation that has systematically stifled its competition whilst deploying a variety of highly dubious methods to force equipment manufacturers to bundle its products. Microsoft has a long track record of producing poor quality and insecure products. Meantime, its senior executives have become very rich indeed. One would have more sympathy with Microsoft if it had poured its vast profits back into securing its products. But it hasn’t.

I hope that legislatures around the planet will go much further than just recommending users stop using one of Microsoft’s products. I hope they will explicitly outlaw Microsoft “bundling”, so that consumers actually have a choice of operating system. It is entirely unacceptable that consumers are forced to buy Windows whenever they buy a new computer. Why should we be forced to pay what amounts to a “Windows Tax” to Microsoft, regardless of whether we want to use its rotten products or not?

The good news is that it seems the Microsoft racket is finally unravelling. I would say to consumers everywhere, now would be a very good time to write to your MP/congressman. Complain to your national/regional consumer protection organisations. If you can buy equipment OS-free then do so. Boycott IT suppliers that still persist with bundling. The writing is on the wall my little goslings…

Meantime it seems the good people of Italy have started a class action against Microsoft to get their Windows Tax refunded:-

The GarfNet team successfully dumped Microsoft back in May 2007 and it was one of the best business decisions they ever made. Moreover, it proved beyond all reasonable doubt that Microsoft-free businesses are perfectly viable:-

Actually MS-free businesses are more than merely “viable”. Being free from Microsoft has considerable advantages, both in terms of cost and in operational terms, i.e. reliability, security, ease of replicating systems, lack of malware etc.:-

Meanwhile GarfNet is compiling a formal complaint to the UK Office of Fair Trading and to the European Union Competition Commission regarding the forced payment of Windows Tax here in the UK. There is still a lot of work to do but this is the progress so far:-

Final comment before the Microsoft apologists and “fanbois” get up-in-arms. I’m not actually advocating the total annihilation of Microsoft. However I think the world would benefit from a much downsized Microsoft, with much lower profits and perhaps a 20-30% market share. I have no doubt that a Microsoft that actually had to compete in the marketplace would produce higher quality and more secure products. This would be better for the consumer, better for national security, better for the economy and better for the IT industry. Long term it might even be better for Microsoft too!

Though I suspect that I will stick with the Penguinisitas, whatever happens to Micro$haft. Honk! Honk!

Seems its not just the Germans who have serious misgivings regarding Micro$haft’s ailing Internet Explorer web browsing software.

In a blackly comic twist, a comedian (he must be a comedian in order to say the things he said) from Microsoft’s propaganda department called Cliff “Trust-me-I’m-from-Microsoft” Evans claimed that Internet Explorer version 8 is really more secure than other browsers. In a two-minute-long harangue largely consisting of inane drivel, half-truths and omissions, punctuated with the occasional downright lie, published in video form on the BBC website, Evans says users must look at the overall security picture.

In a nutshell, users should ignore the fact that Microsoft Internet Explorer has more holes than a Swiss cheese and carry on using it anyway. Whilst droning on about the virtues of Internet Explorer, Evans neglected to mention that the same vulnerability that allowed hackers to gain illegal access to Chinese users’ gMail accounts last week, still remains un-patched and probably won’t be fixed until next month!

Nor did Evans mention that some of those who were let down by his company’s appallingly poor-quality products were in fact Chinese dissidents that now risk being arrested, imprisoned, and even tortured or executed.

However, in-line with our European colleagues, the official word from the Goose Pond, regarding Internet Explorer, my little goslings, remains pretty much the same as in my last post, namely:-

Don’t use Microsoft products, ever!

Bundesamt fÃ¼r Sicherheit in der Informationstechnik (which translates to Federal Office for Information Security), issued an unprecedented warning to users, not to use Microsoft Internet Explorer. This follows the discovery of a security hole that led to attacks against Google and other US companies by hackers, allegedly based in China.

The warning applies to all the latest versions of Internet Explorer, namely versions 6, 7 and 8:-

Instructions telling hackers how to exploit the security hole are available on the web – but I haven’t found them yet! However, the US Department of Homeland Security has published more details of the problem. Seems it is a so-called zero-day exploit and Microsoft does not have a fix for it yet.

Not surprisingly, Microsoft has tried to play the affair down. Since it is unable to offer a patch, Microsoft has offered a “workaround” instead. Basically it involves putting your browser into what some refer to as “cripple mode” by setting the Internet Zone Security setting to “High“. However, the German authorities say even this won’t make it safe.

The reason for the furore is that it seems Google’s Chinese servers were attacked by hackers exploiting one of Internet Explorers many security holes. Machines belonging to Chinese gMail users were compromised via Microsoft Internet Explorer, allowing hackers to get access to their gMail accounts.

It seems this has allowed the Chinese Authorities to obtain vital information regarding dissidents. If this is true then, it could result in imprisonment, torture or even death. Of course, we don’t know how deep these attacks have gone and no one has actually proven it was the Chinese behind the attacks either. After all, the United States has a long and sad history of creating “bogeymen” to act as scapegoats for all evils of the world. And if there is one government that is less trustworthy than China’s, it is that of the United States – along with the British one of course!

Likewise, Microsoft Internet Explorer running on Microsoft Windows has a long and sad history of serious security flaws, one of which is that your machine can become infected with malware simply by visiting a website. Worse, Windows fans – people daft enough to believe all the rubbish than emanates from the spindoctors at Redmond – will tell you that its the user’s responsibility to make sure a website is safe before you visit it. I’m not sure how exactly? Thousands of perfectly legitimate sites are hacked every day.

Fortunately, it seems that the computer-using public is slowly waking up to the fact that Internet Explorer is indeed a very poor quality product. According to hitslink.com it seems that Firefox has 25% of the market and the combined market share of all the Internet Explorer versions has fallen to 63%. Interesting to see what the figures look like in a couple of weeks, don’t you think?

Moreover, the W3Schools stats make really interesting reading. Granted, its clientÃ¨le is likely to favour standards-based browsers. Nevertheless, its figures indicate that IE’s combined share has fallen to below 40%:-

A couple of final notes of caution…

Firstly, many of the articles regarding this debacle refer to the BSI. This is of course the Bundesamt fÃ¼r Sicherheit in der Informationstechnik, which translates to (German) Federal Office for Information Security, not the British Standards Institution. Interestingly the somewhat pro-Microsoft British Government has remained very, very quiet on the subject!

Secondly, the official Goose advice to computer users who really want to remain safe, regardless of what country you live in:-

Don’t use Microsoft products – at all!