I found myself at the 50th Anniversary Trabifest in Zwickau in the former East Germany back in June 2007. Not sure I fully understand the enthusiasm for these funny little cars – though I did find myself becoming bitten by the bug.  I guess there is a large cultural element to this phenomenon. It seems the humble Trabi has become another cultural icon. One enthusiast I met described the Trabi as, “A smile rising from a troubled past.”

They certainly are quite amusing little things, as these images will indicate…

Firstly, I managed to glean from some friendly Trabi enthusiasts that there is a heirchical distinction between the four-stroke models and the earlier two-stroke versions. Cars fitted with the Volkswagen-built four-stroke engine can be distinguished from earlier two stroke models by their larger rear light clusters. These came with the amazing modern innovation of built-in reversing lamps!

The four stroke-models also had asymmetric radiator grilles. However, I am reliably informed that the four-stroke versions are not considered to be”real Trabis” by the Trabant 601 cognoscenti. Real Trabis should sound like sewing machines and leave a trail of dense blue smoke behind them, apparently.

Trabis are strange but endearing little machines. And the Trabi people? Well they are a funny old bunch too. I have often observed that if you put three hundred or more Germans into a relatively confined space and add copious quantities of German beer, then the mass-singing of traditional German oompah music will ensue. Nowadays, this is often punctuated by a rock band headed up by a very convincing David Hasselhoff clone. Yes The Hoff is still very big round these parts – remembered not for his roles in Baywatch or Knightrider, but for his Berlin Wall Concert in 1989, where he sang “Keep on Tabi-ing in a Free World!” – or something like that!

Certainly the popular notion that Germans don’t know how to enjoy themselves is total nonsense. These folks were having a wail of a time. And so did I… 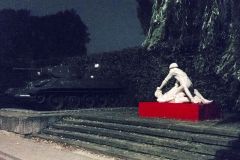