The New Millennium was a big project, undertaken on a shoestring budget. It resulted in a huge site, run by a team of enthusiastic writers receiving and trying to answer stacks of emails from all around the world. All of this became difficult to manage especially as the project failed to generate any revenue!

My father, David Lucas was major contributor & supporter. Unfortunately he died suddenly on the afternoon of 1999-11-18. My enthusiasm for the project waned as the magazine ran its last edition at 1999 Christmas. I concentrated on getting over the loss and on my commercial work. The site was allowed to rot for a while as the remaining members of the team started projects of their own.

It was written entirely by contributors who don’t fit neatly into someone else’s’ boxes. But I think this gave it ‘soul’. I met some amazing people and brought on board even more amazing people that I already knew. I learnt much.

The Milly‘ offers a record of some of people I’ve met – some via the net, some via the real world and quite a few more in the real world wanting to meet others in the virtual world! Many started their own sites as a result. Hard to say how many lives ‘The Milly‘ really touched. There must be a thesis in it! 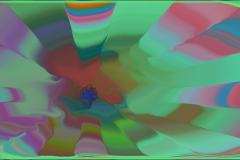