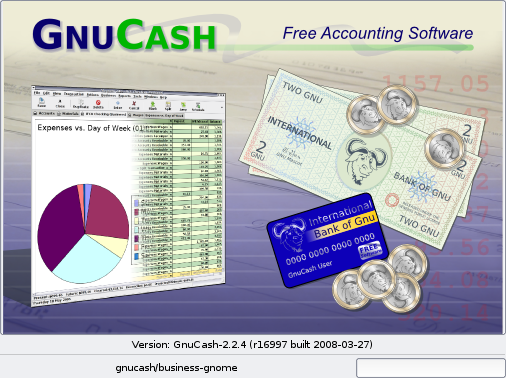 Nowadays, one reads a lot about open source equivalents of proprietary software. Often these are described as poor substitutes for the real thing. However, some open source apps are starting seriously to outperform their proprietary counterparts. Mozilla Firefox is a classic example of this phenomenon. GNUCash is another.

I was a Micro$oft Money version 2 user, then a Money 2001 user, first on Windows and then on Linux using WINE. But the fact that later versions of M$ Money use Micro$oft Internet Explorer as their engine scared me. You really don’t want your accounts package connecting to the internet without your express permission, do you? Moreover, Internet Explorer is not exactly the most secure application on the planet, is it?

Whilst M$ Money offers a lot of functionality, GNUCash is also packed with useful features. Indeed it is is one of the few applications where its “Tip of the Day” dialog really is worth reading. 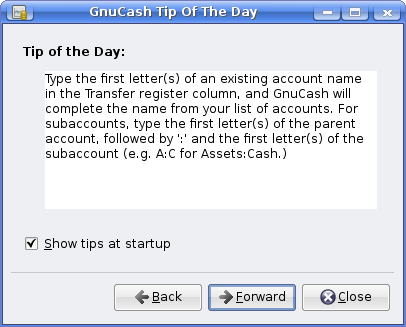 Tip of the Day dialog

Granted, GNUCash is probably not as pretty as M$ Money. But it is truly standards-based and Unix-friendly. Therefore it is superior to any proprietary system IMHO, especially if you plan to keep records for a very long time.:-

You can export all your M$ Money accounts as QIF files (albeit one-by-one) and they import perfectly into GNUCash – which is what I did. I have been using it since 2007 May and it is one of the best business decisions I ever made. It is very easy to set up a set of accounts that suits your particular business. And its generic nature means it can be customised to deal with whatever method of value-added or purchase tax exists in your particular country. The sample screengrab below shows a fictitious set of accounts for a non-VAT registered UK-based professional photographer. 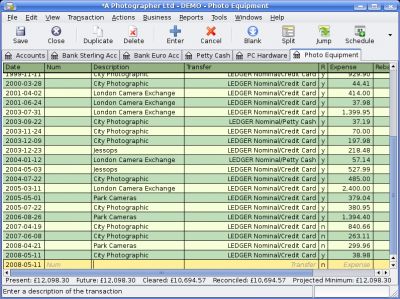