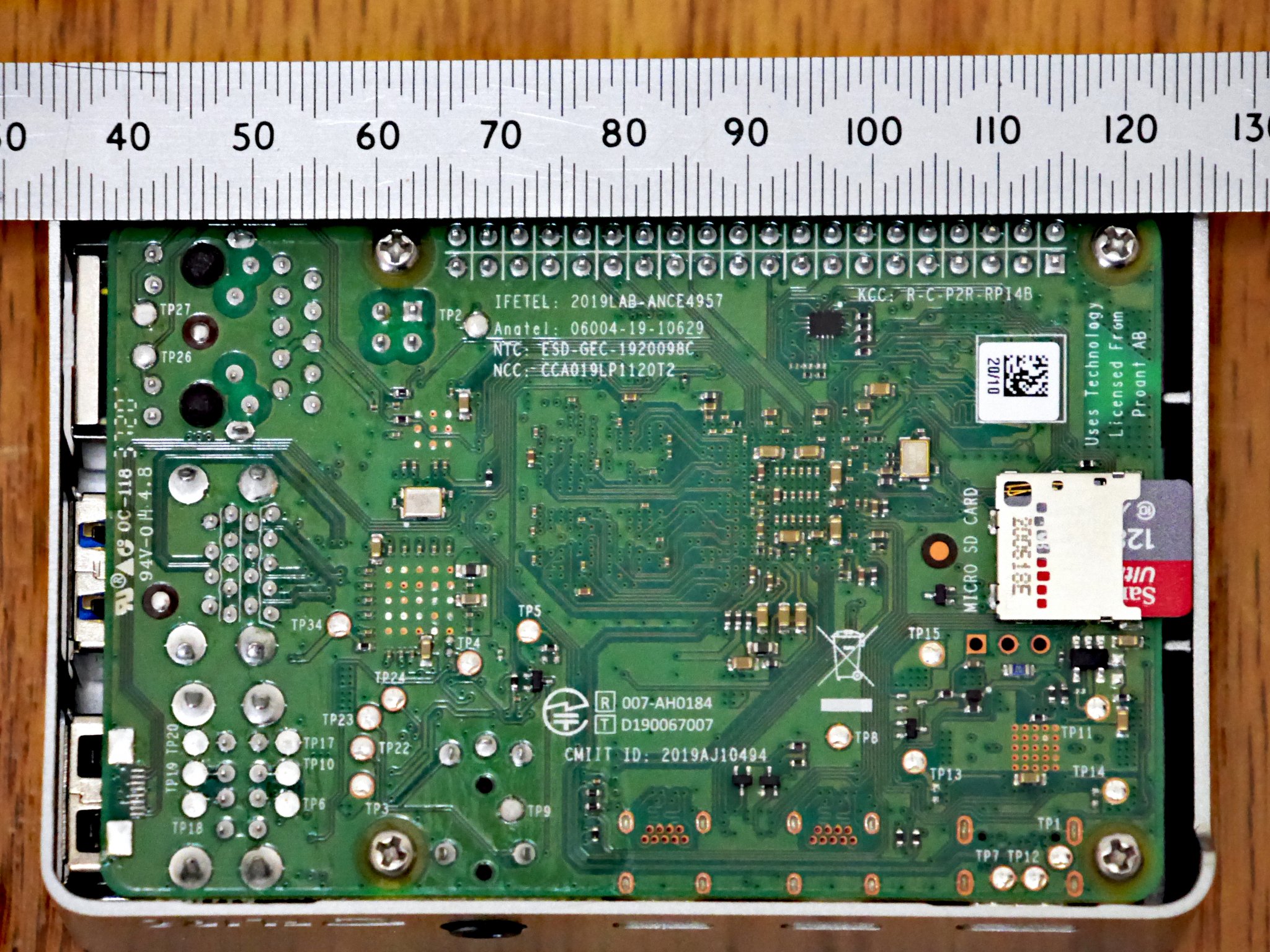 Following on from my last article, this is Raspberry π4 8GB for Zoneminder part 2. Now I have had time to set it up and test it for a while. Firstly, I decided to abandon the ARM64 version of Ubuntu on π because it seems slow and clunky. Basically it seems the current beta ARM64 Raspian “Buster” is actually better than the allegedly tested LTS ARM64 Ubuntu 20.04.1. It’s a heck of a lot faster too  and the Pi-specific tools actually work as well. And while I remember it, apparently Raspian has been rebranded as Raspberry Pi OS now – so I have to learn not to keep calling it buy its old name, if I can… 🙂 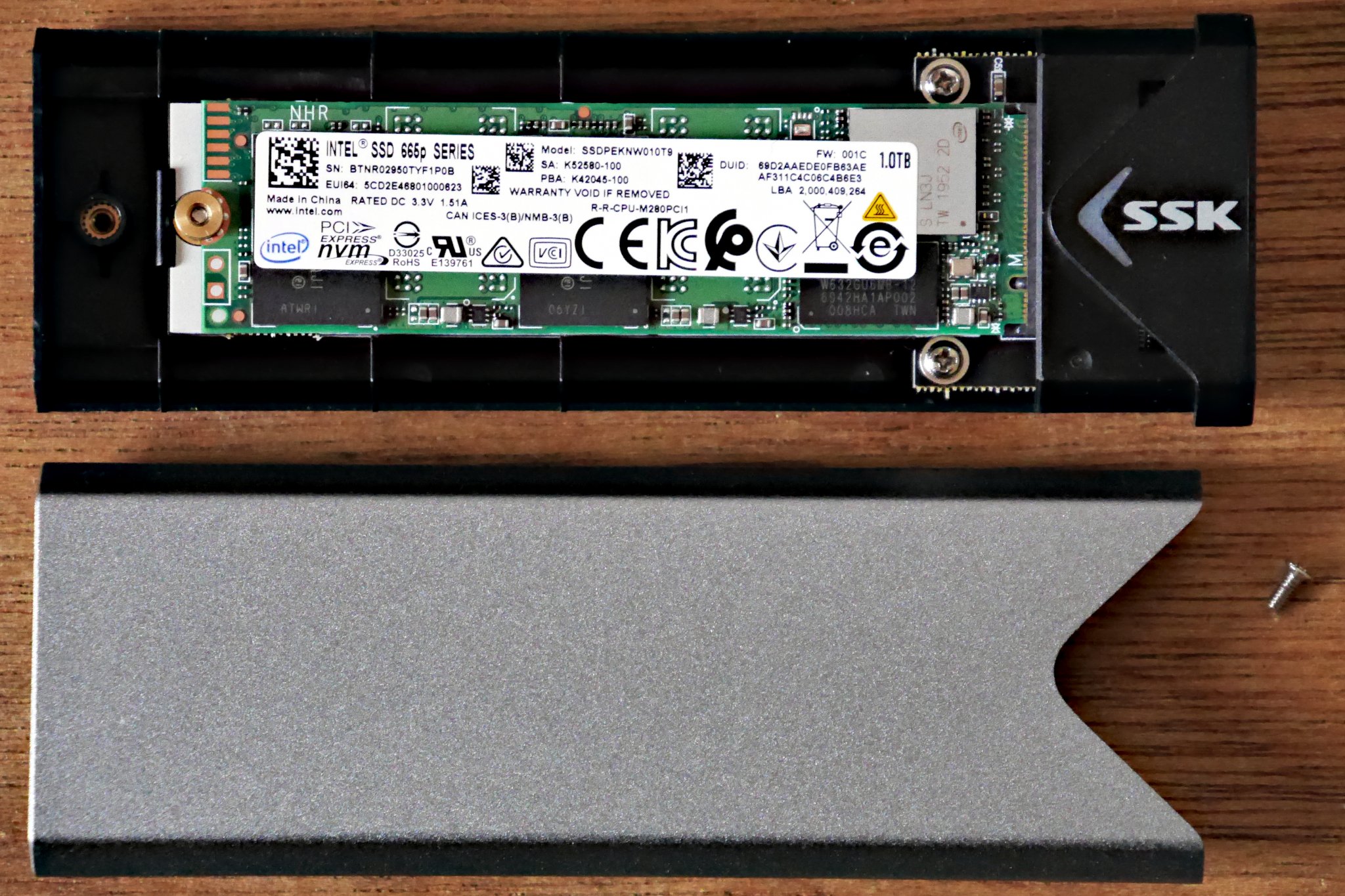 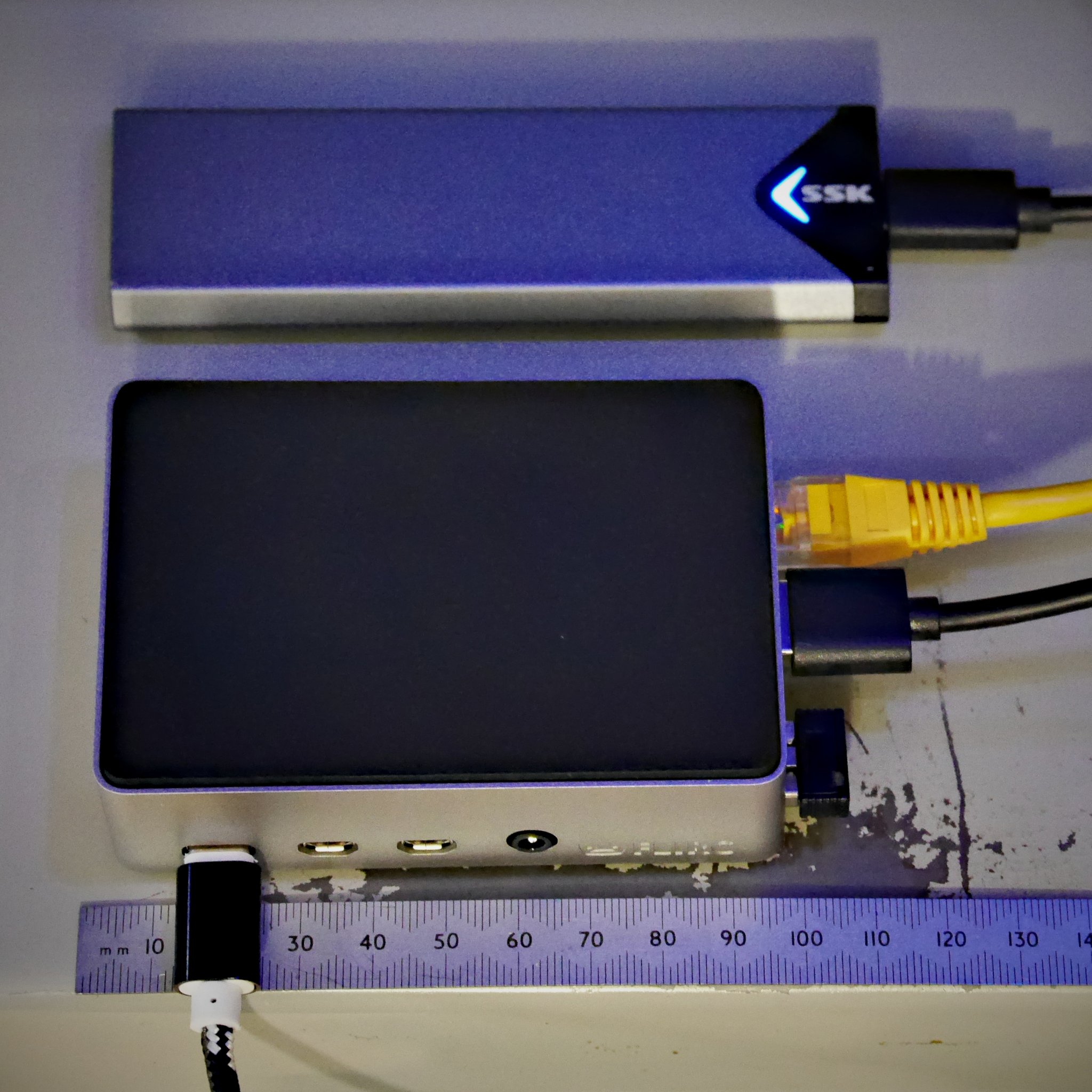 Connecting it up for the first time. Just three connections. Power, Ethernet and the USB3.0 interconnection between the external NVMe and the Raspberry π4. Please excuse the strange colours. It was kinda backlit by the monitor I was using to test it! Hopefully it should give some idea of how small the entire kit-and-caboodle really is.

Mix of good news and bad. Fortunately there is a lot more good news than bad. Moreover, I have workarounds for most of the annoyments and I suspect almost all of these will resolve themselves over time, once the ARM64 Raspberry Pi OS for π4 becomes mainstream. Therefore I’ll start with the good because TBH I’m really rather pleased with this…

A few snaps from the project… 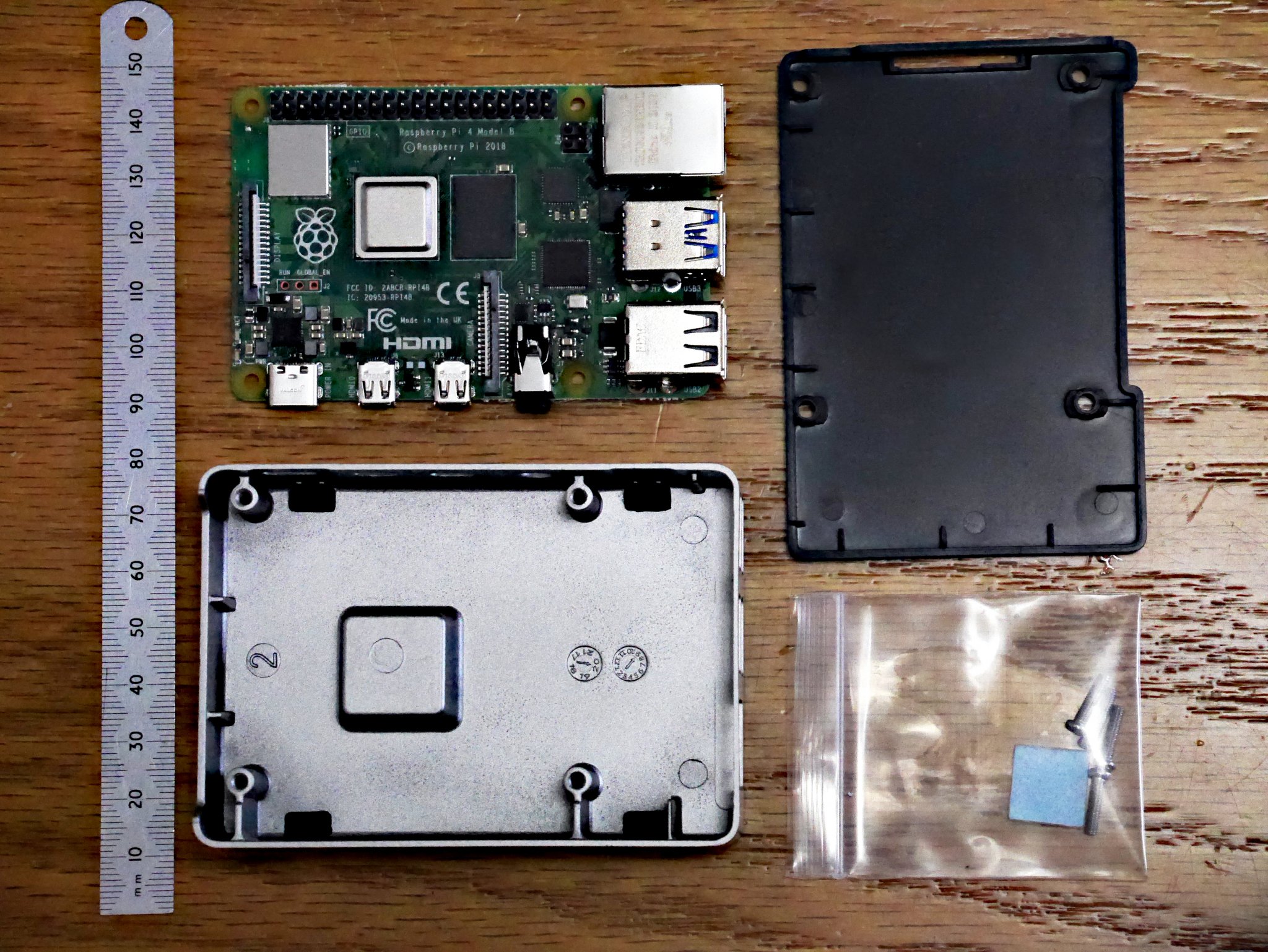 Putting the π4 in its FLIRC aluminium case. 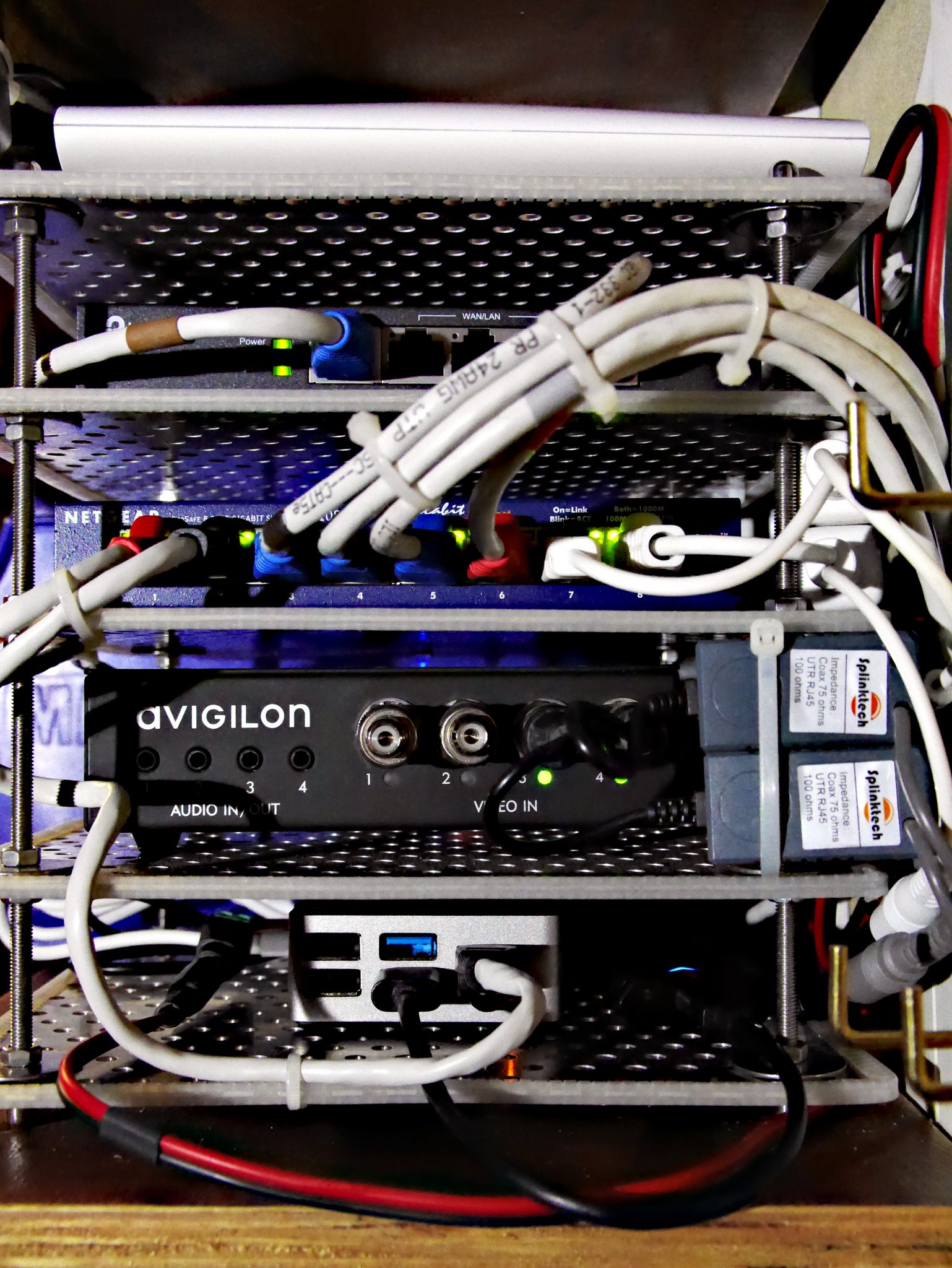 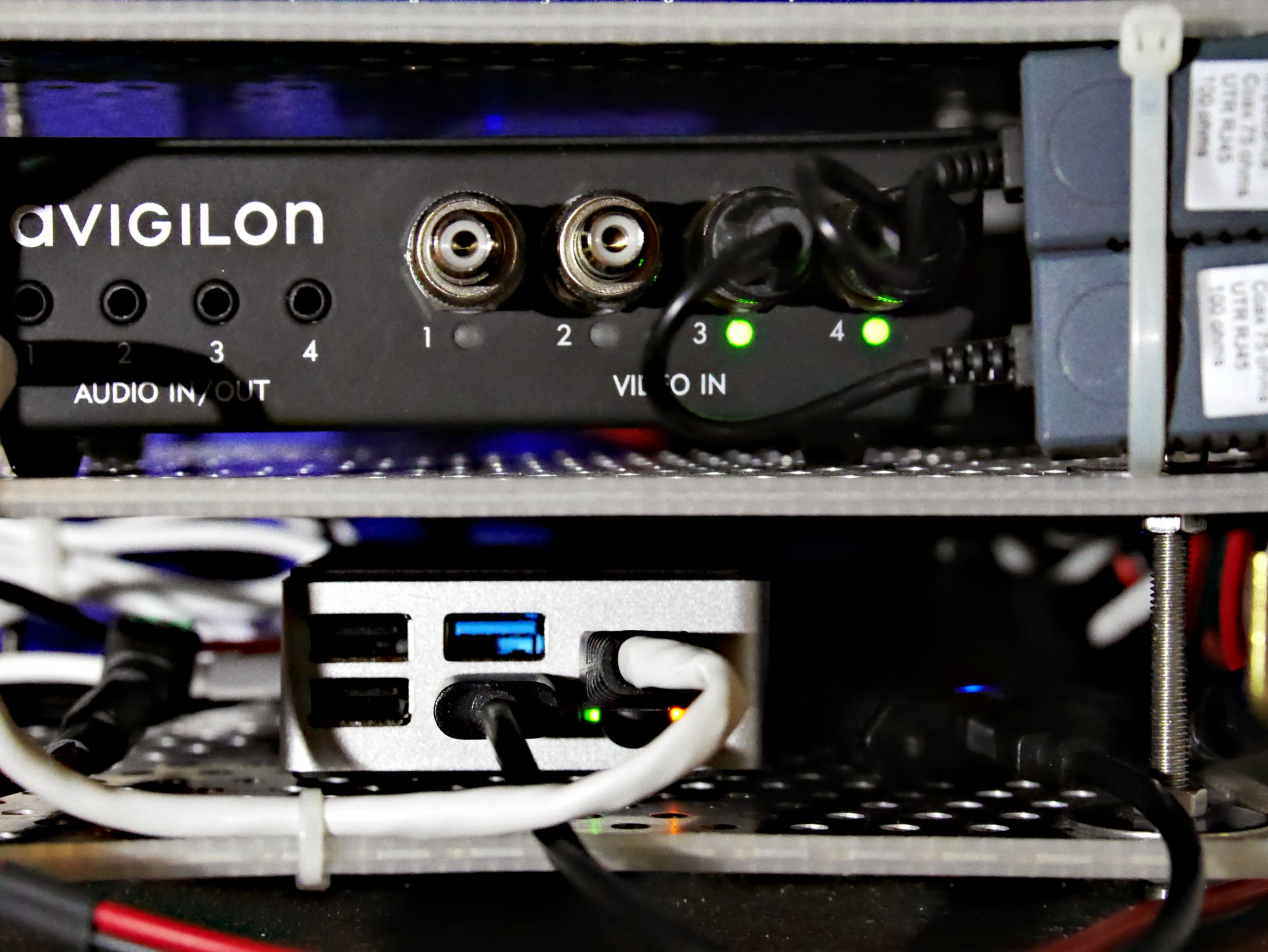 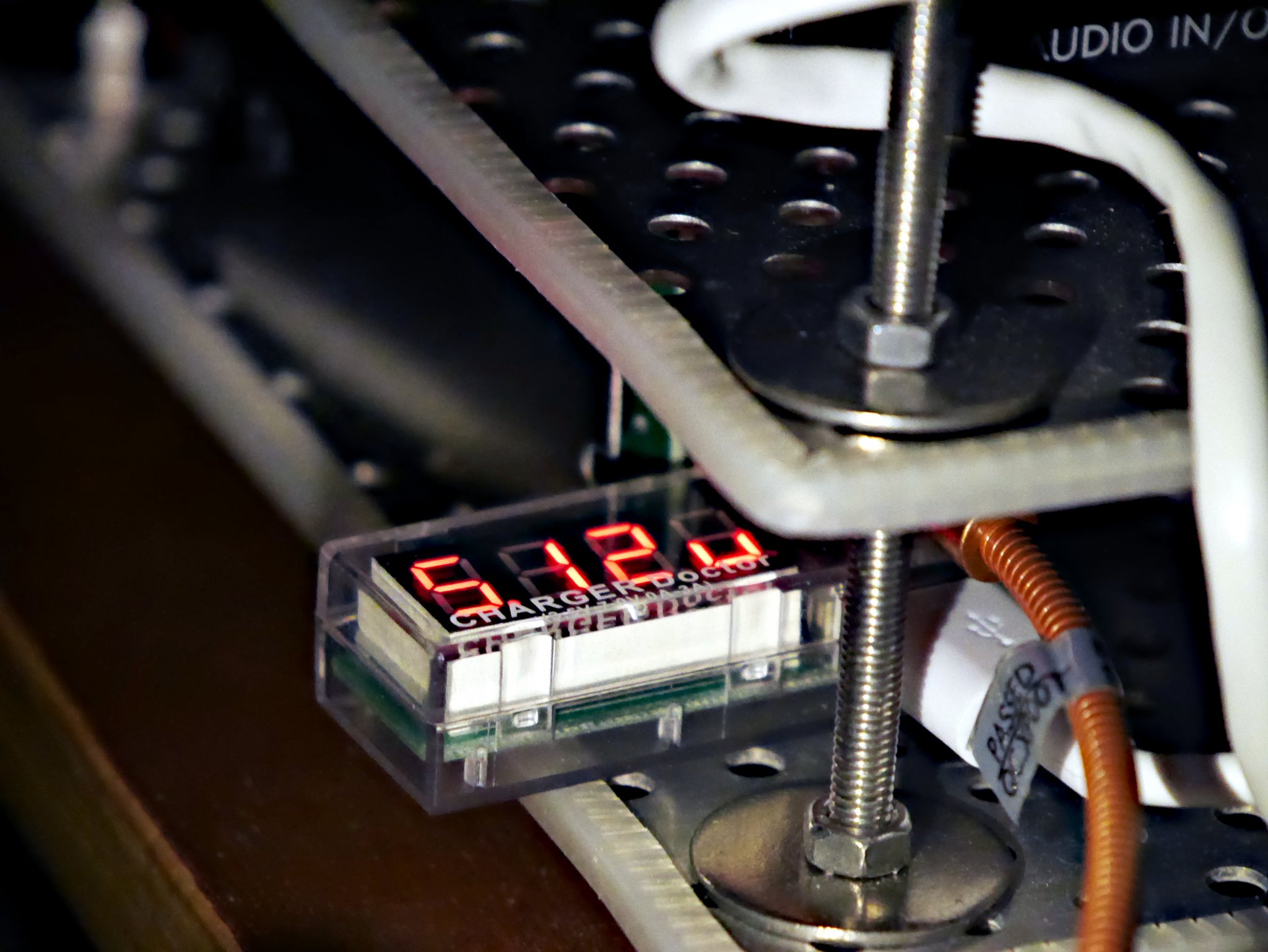 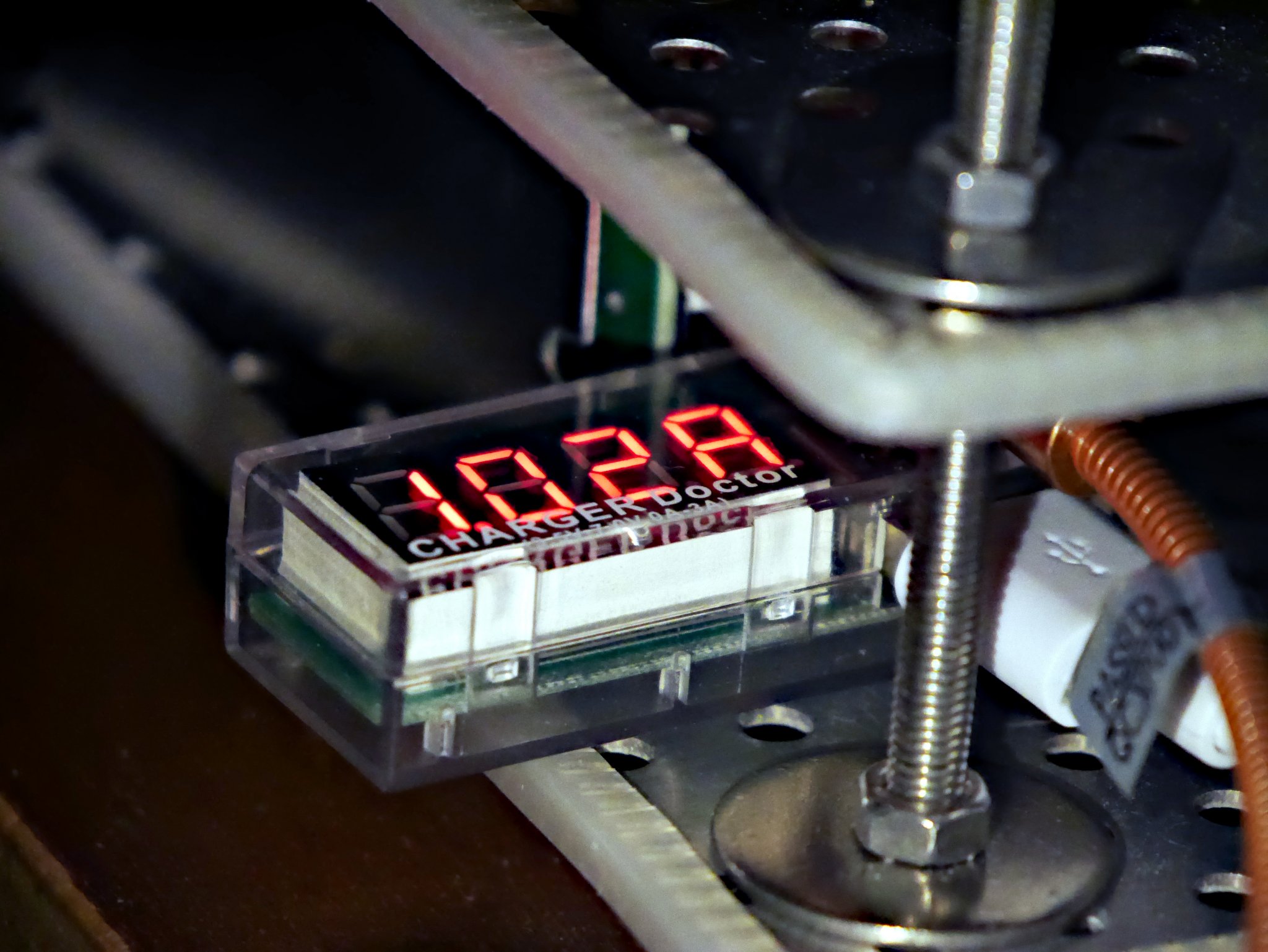 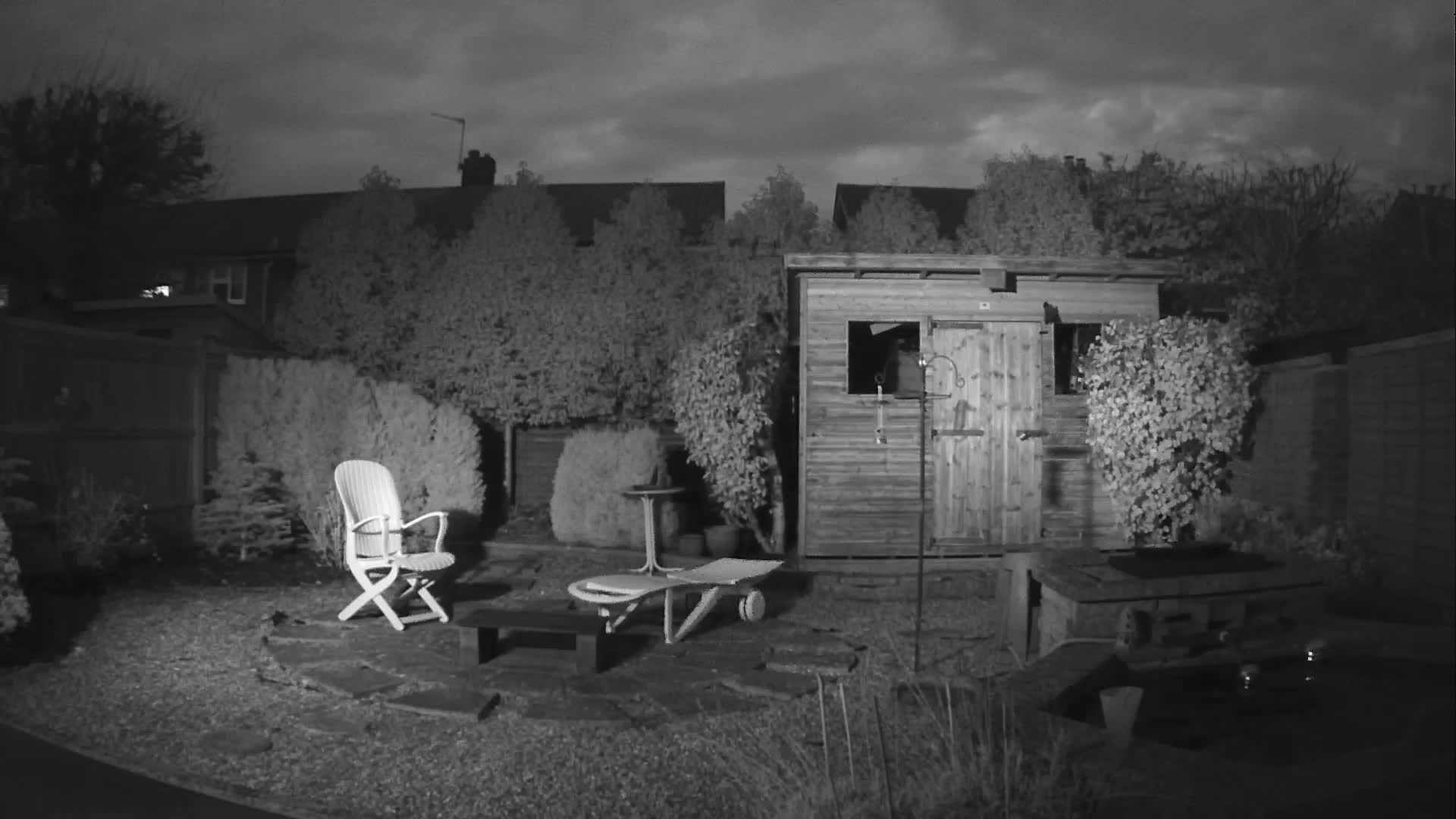 Our back yard, captured from 1080p camera at dusk – even quite cheap security cameras do Infrared. This one has a solenoid that removes and replaces the IR filter as it’s needed so the daytime colours stay nice.. 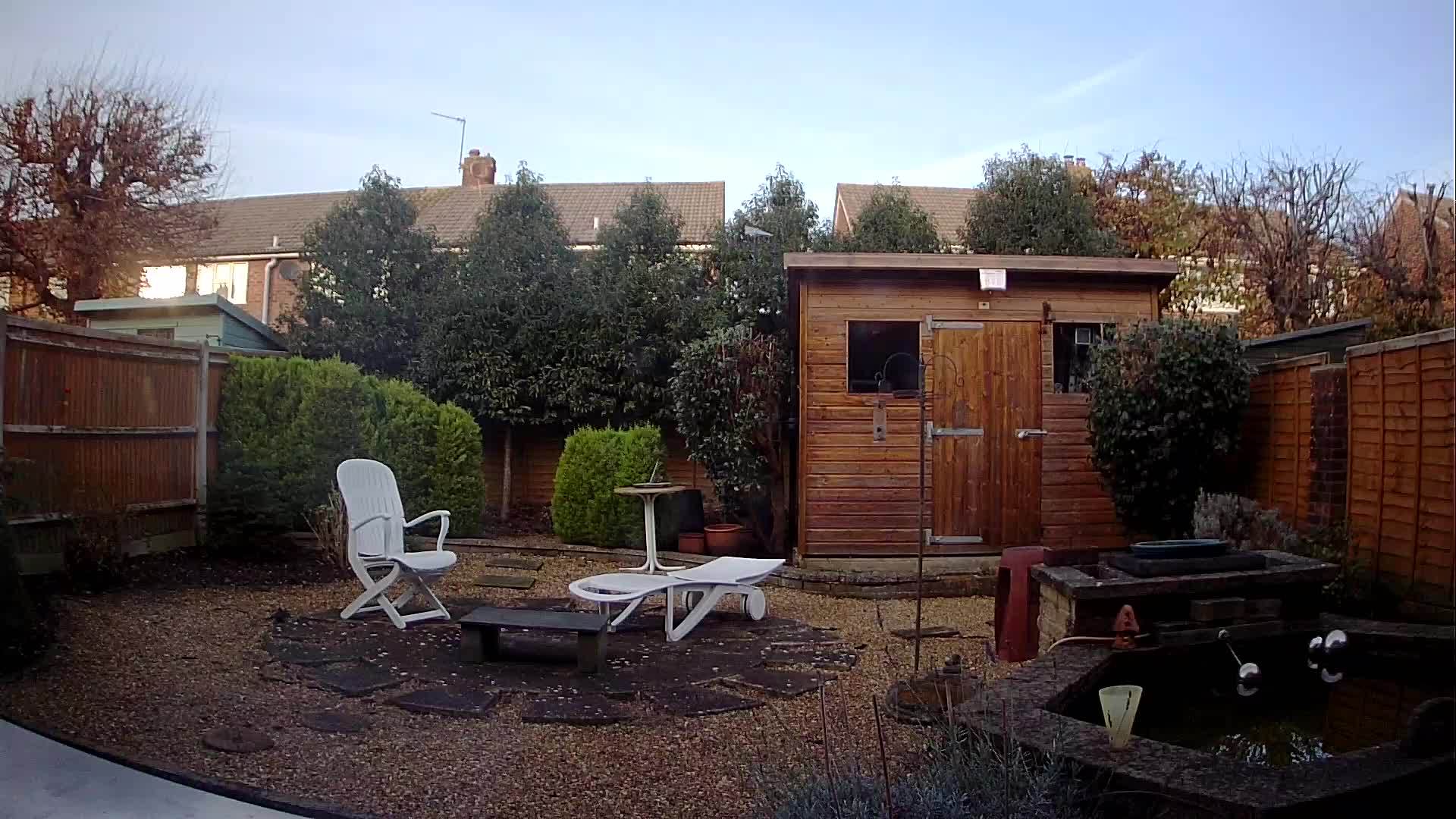 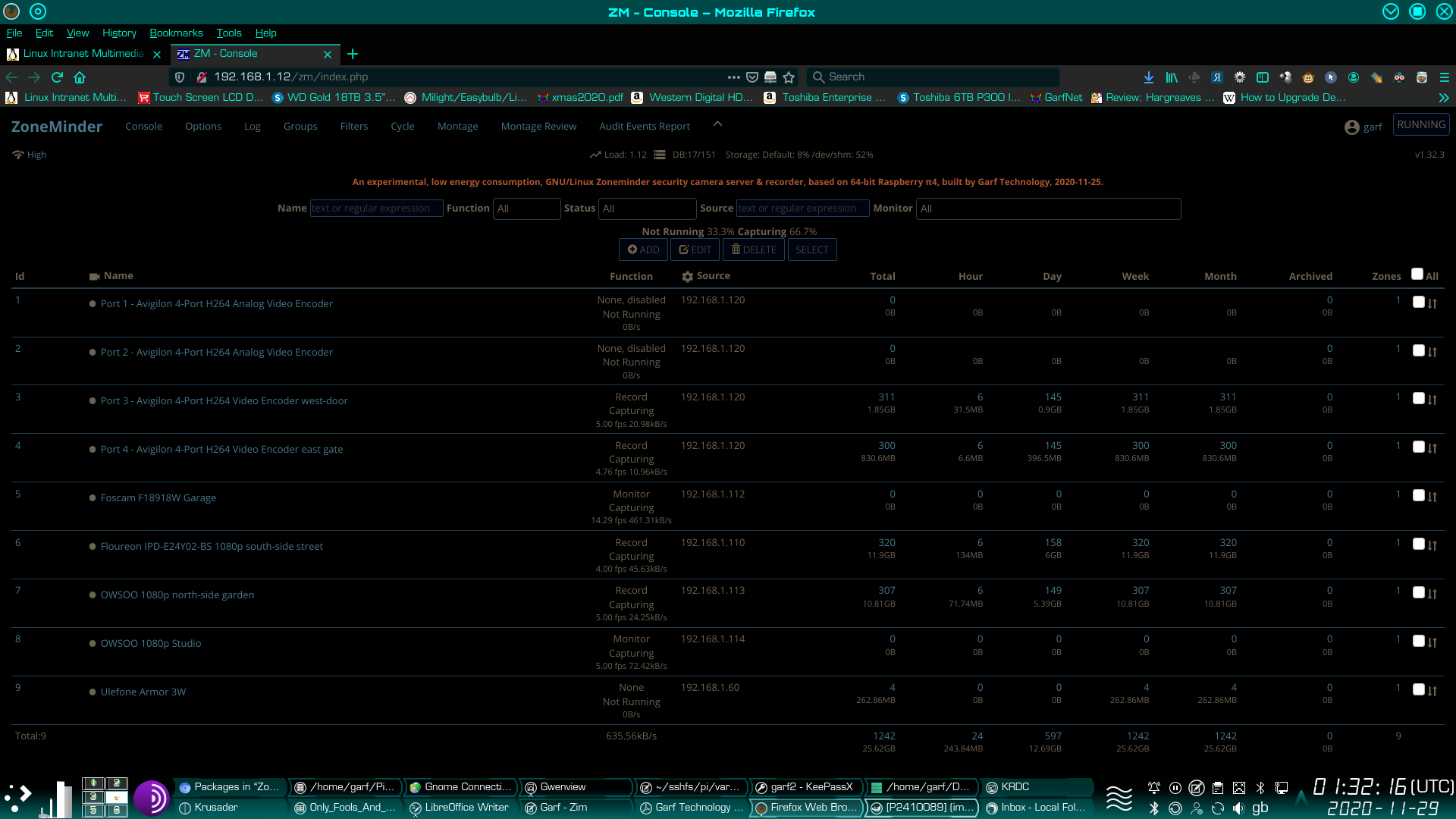 Screengrab from Zoneminder showing all camera connections and their various statuses (not all cameras are necessarily enabled and/or recoding at the same time). As an aside, please note entry #9 – my smartphone can talk to Zoneminder, if I wish it to, using IP Webcam software I mentioned in another post on this site!

I’m pretty gobsmacked that a tiny box about the size of a cigarette packet can do so much, with such phenomenal energy efficiency.

The official π3/4 USB PSU delivers up to 2.5A https://thepihut.com/products/official-raspberry-pi-universal-power-supply. My 12 volt to 5 volt buck PSU will deliver up to 5 Amps safely. I have been monitoring my π’s power consumption very carefully indeed. I pointed the garage security cam at the USB multimeter! Seriously!

It quiesces at around 1 Amp. It hovers around just over 1.5 Amps under heavy load. E.g. with CPU load averages over 4. Though I struggle to do that with my current config! Managed to get the CPU load up to around 7 by opening lots of remote browser windows on lots of cameras whilst also looking at the camera montage with ZMNinja app on my smartphone. I was also doing a “sudo apt update && sudo apt full-upgrade” and had several SSH connections open too. I managed to record a peak of 1.53 Amps. See below 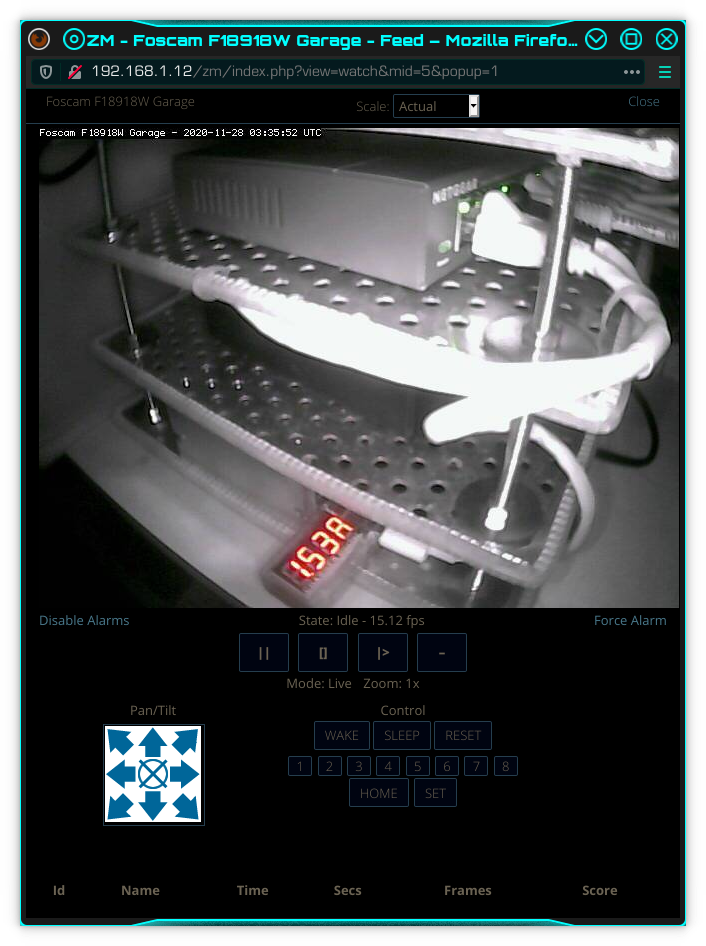 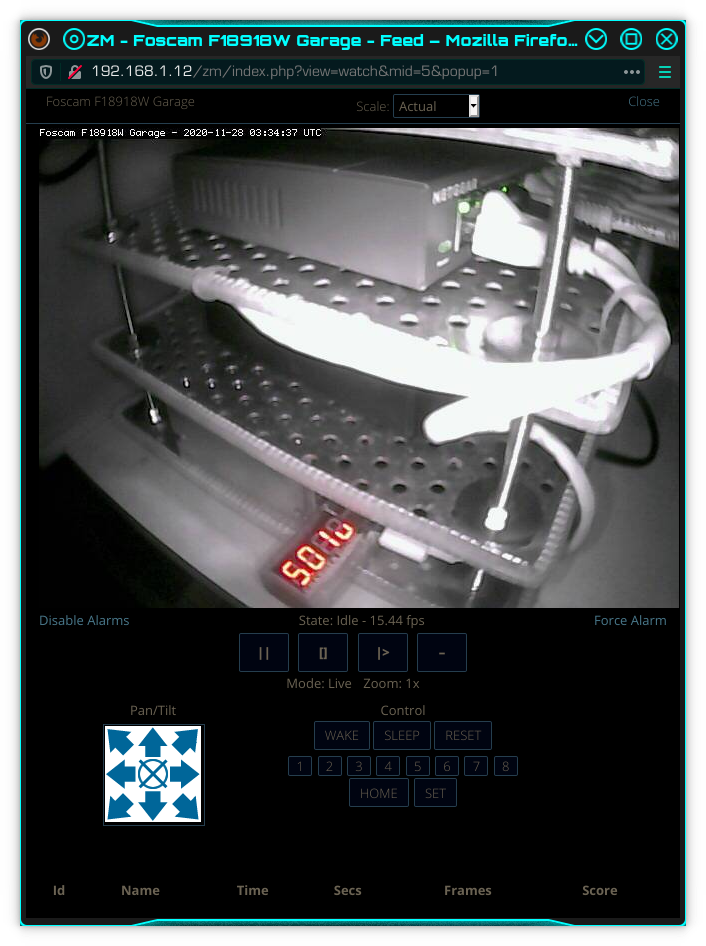 Voltage – remember there is a small drop across the multimeter’s ammeter current shunt (reads 5.01 volts)

A few other observations

Meantime just a few more observations regarding my system that may be of interest. ATM Zoneminder is indicating a data retention usage of around 12.6GiB per day for all four of the cameras that I’m actually recording. “df -h” indicates that as of 17:24 UTC today I have 849 GiB free. Which means that at current usage, and assuming ZM always leaves 5% of the disk (938 GiB x 0.05 = 46.9 GiB) free, I have 63.6 days of data storage, excluding the three days I have already used. (Note df -h displays in Gibibytes not Gigabytes)

Of course I guess there will be other data on the drive, plus the usual bloat from upgrades and the miscellany of additional utilities one tends to insatll on new bits of kit. But even allowing for all that, it seems I will have about two months of data retention on this disk, which by any standard is actually pretty damned good, IMHO. 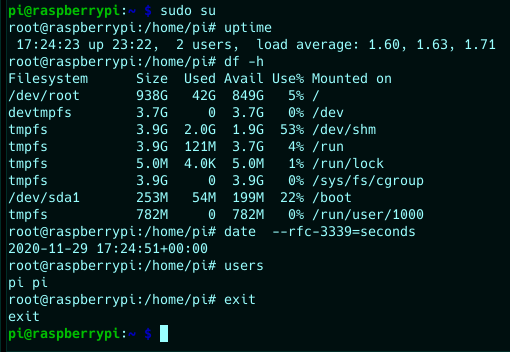 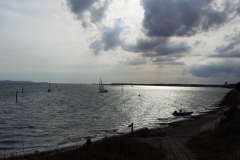