Another update: Raspberry π4 for Zoneminder part 3

My π4 Zoneminder has been running for just over two months. Overall I’m pretty happy with it. The main issue I had was that the current stable version of Zoneminder 1.34.x was not available for the ARM64 version of Pi OS in the Debian repository. At time of writing, most of the current release of Pi OS is in fact Debian version 10 (Buster), and it comes from the Debian repositories.

Or how I fixed the biggest annoyment of all 🙂

I after a lot of hunting, I finally stumbled-upon a version of Zoneminder v1.34 compiled for ARM64 over at the unofficial Debian Multimedia repo, which seems to work an absolute treat. Here’s how you get it.

Firstly, open a terminal and open the sources.list file for editing, as root…

Edit the file so it reads file like this. Note, a little common sense may be required here, if you have other repos enabled or other comments…

Assuming you already have installed Zoneminder 1.32 all you do now is run the following command in a terminal window…

Seeing what’s going on, at a glance

You may wish to check your Pi’s temperature, look at how heavily you are loading your CPU’s. So you might find this little script quite handy… 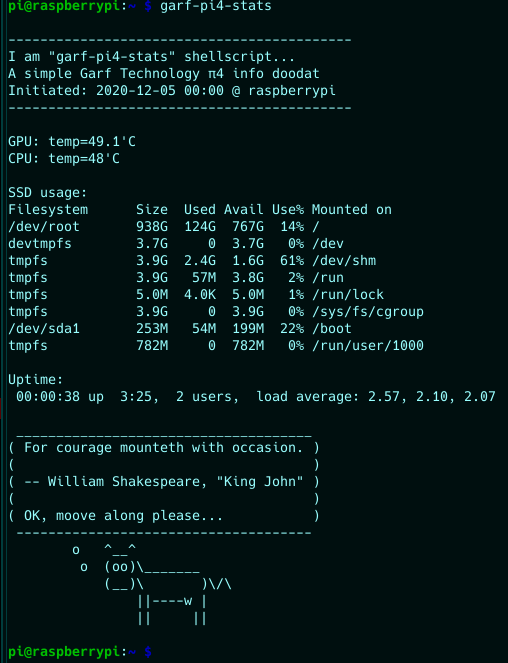 The shell script code for the above is as follows. Copy it from here and paste it into nano, or some other text editor of your choice:-

Assuming you are using nano…

Paste the the code you copied a little earlier (shift+ctrl+v). Save the file (ctrl+x) then chmod the file to make it executable

Note: you need to have cowsay and fortune installed if you want the silly bit at the end

I had to reboot my modem rack a few weeks back because our internet connection stopped working. It turned out to be an issue at our ISP’s end. When I powered it all up again, I discovered that the π4 boots significantly faster than our router, therefore it doesn’t get an IP address from the router (!!!).

Fortunately, it is relatively easy to make π4 fall back to a static IP if DHCP fails. It’s explained in the comments at the bottom of /etc/dhcpcd.conf – and works perfectly.

I run the π4, an Avignon A2D x264 converter/encoder (for legacy analog cams), an 8 port Ethernet switch, a TP Link Router, a Draytek broadband/cable modem, four cameras and our door entry system all from the same 12 volt switch-mode steel-cased PSU and fused distribution board, as pictured above. This PSU in turn, gets its mains power from our UPS (uninterruptible power supply).

This particular model has LED indicators to indicate whether the fuses are intact or not. These DC distribution boards are specifically designed for CCTV systems and eliminate the need for loads of wallwarts and extension leads. It’s safer and significantly more energy efficient too. I then use a simple 12v to 5v buck converter to drop the 12 volt PSU output to 5 volts to power the π4. 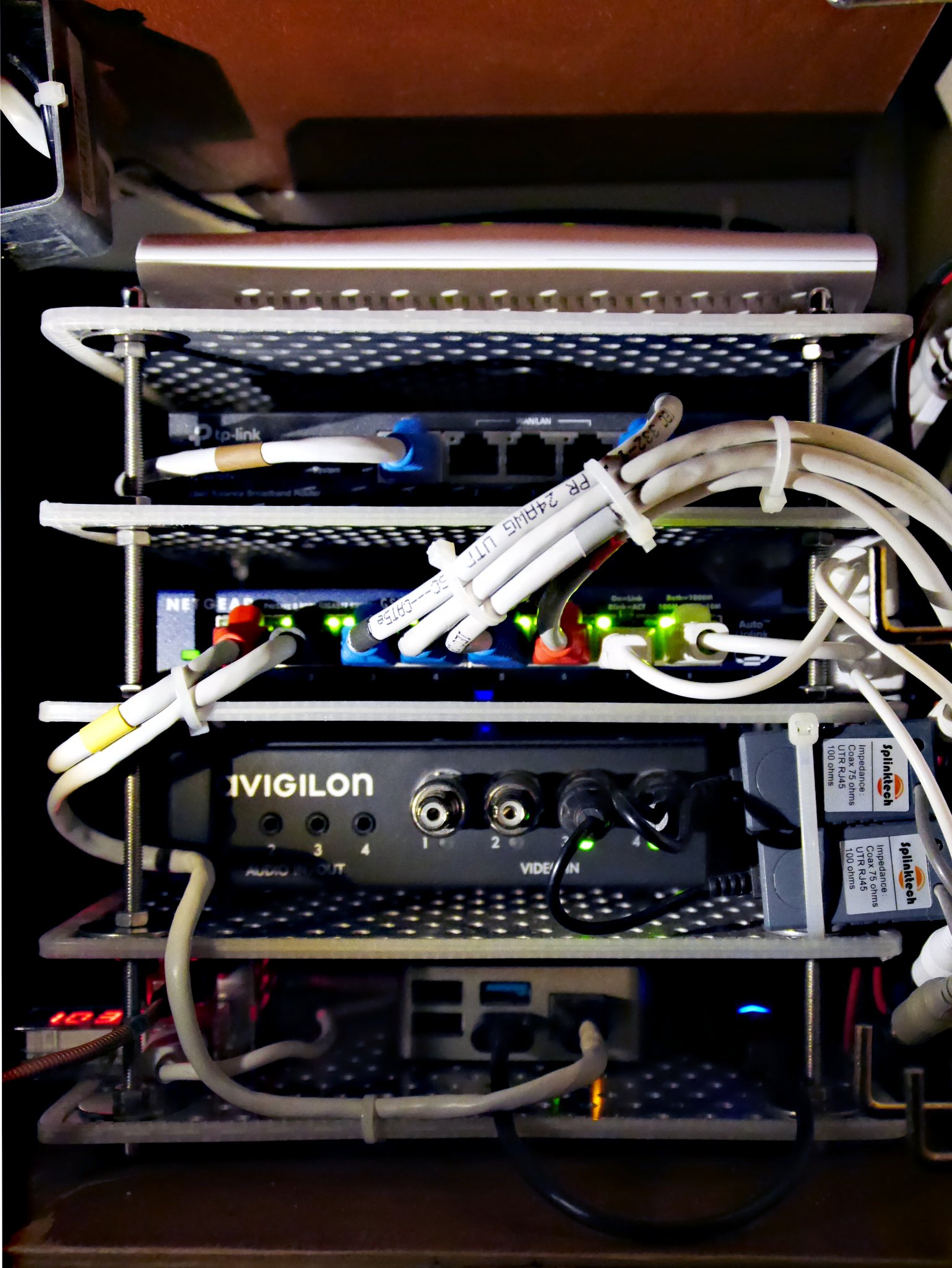 I am measuring the π4’s power consumption quite carefully ATM. You can just see the little USB DMM bottom-far-left of the above image. It averages between 5 and 7 watts – and that includes the 1TB NVMe SSD. The original Zoneminder PC consumed between 40 and 55 watts.

I am successfully running 8 cameras of the following types…

Load averages to creep up from around 2 to between 4 and 5 once several people start looking at cameras, but that is to be expected. I am also considering various optimisations, such as increasing the size of /dev/shm so that ZM can make use of more of π4’s 8GB RAM.

The thing I least like about my ZM system is having the NVMe disk in a separate case. Granted its not really a major issue because I hardly ever see the set up anyway. My wife can’t understand why it bothers me at all. I only ever see it when I go into the garage. In fact, I really have to peer into the modem rack just to catch a glimpse of either the π4 or the SSK NVMe case at all – as previous photos will bear testament. Nevertheless, it still niggles me!

Meantime I have been testing and tweaking my Zoneminder set up to see what happens under various load conditions. Overnight I set all 8 camera streams to maximum resolution and 25 fps. This bumped the load average up to above 7 . This is far too high for a quad-core running a streaming application. However the device temperature and indeed the SSD seem relatively unaffected. The FLIRC π4 case reached 38°C and the SSK NVMe case reached 32°C. Both are cases designed to act as heatsinks. Of course I am cheating here. I’m guessing that placing both devices on a 200mm x 200mm x 1.2mm slab of perforated stainless steel probably has a more than minor effect on dissipating heat!

Just rebooted after 45 days uptime, due to a kernel update. System is retaining just over a month’s video from 6 cameras (3 of which are 1080p) – though, as i said earlier, I have restricted the frame rate to 10 fps. CPU load average generally hovers between 3 & 4 (which is fine for a 4-core CPU). And all the while, it’s consuming around 6 watts of power! 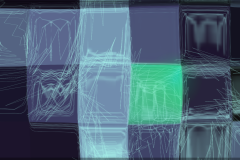