GNU’s not Unix? If not then why not?

The GNU/Linux family of operating systems (e.g. Debian, Fedora, KDE Neon, Kubuntu, LinuxMint, Red Hat, Ubuntu, Xubuntu et al) are not permitted to use the UNIX trademark. Instead, they are described as “unix-like“. In fact, the “GNU” in GNU/Linux (c/w the “G” in GIMP) is a recursive acronym meaning GNU’s not Unix. In a nutshell, the GNU/Llinux family of operating systems do all sorts of clever unixy stuff, but they cannot legally call themselves UNIX.

Whereas Apple’s OSX is  UNIX. In fact, most releases of OSX are amongst the few OS’s that are actually certified as Unix. Which means it is permitted by the trademark’s owner, the Open Group, to use the UNIX® trademark.

The odd man out insofar as modern operating systems are concerned is actually Microsoft Windows. Despite some fairly major changes in the late nineties and early noughties, Windows definitely ain’t Unix. Indeed Windows still displays its DOS origins (backslash directory delimiters, use of “drive letters” etc.) But even Microsoft seems to be waking up to the fact that the future is unix-like. Its Powershell command line interface now allows many unix-like commands on Windows. And it estimates that 50% of its Azure cloud servers now run GNU/Linux, rather than its own Windows Server.

Of course, Linux has found its way into all sorts of other places one may not immediately think of as “computers”, for example, routers, NAS-boxes and smart TV’s. But perhaps most significantly, the Linux kernel is at the heart of the planet’s most popular consumer operating system ever, Android. Which appeals to those of us who wish to divorce our mobile devices from Google, and turn them into serious handheld computers. We can leverage Android’s Linux subsystem in our favour by rooting our smartphones. 🙂

One thought on “GNU’s not Unix? If not then why not?” 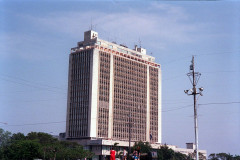